A New York man who is cycling through all 50 U.S. states in the span of a year has discovered “peace and quiet” amid his journey through the southern state of Arkansas.

But not just that — he’s also appreciated random acts of kindness from his fellow Americans “in the middle of nowhere.”

Bob Barnes, 52, of Syracuse, N.Y. has been sharing his latest travel experiences and discoveries with Fox News Digital, including his 27th capital visit: Little Rock, Arkansas.

The former Uber driver arrived in the city on Monday afternoon, just days after he crossed into Arkansas from Oklahoma on Friday, Feb. 11.

This week, Barnes shared some of his reflections about “The Natural State,” as well as his appreciation for our country and its people.

As Barnes was cycling in solitude, he noticed a small refrigerator on the side of a rural road.

Bob Barnes told Fox News Digital he experienced random acts of kindness in the state of Arkansas. He came across this fridge “in the middle of nowhere.”
(Courtesy of Bob Barnes)

Posted on the front of the fridge was a note: “Free water! If you are in need of a snack or drink, please take one!”

Inside was fruit and other items available to anyone who needed them.

Barnes said he grabbed a Swiss roll and went on his way.

Barnes explained that he took a Swiss roll from this fridge, which he spotted on the side of a rural road.
(Courtesy of Bob Barnes)

“That kind of gives you a feel for not just Arkansas and Little Rock, but the whole country,” he said.

Barnes described the people of Arkansas as “very outgoing and inquisitive.”

The people he’s met — though those encounters have been few and far between, he said — have quickly recognized his New York accent.

He said they’ve been curious about his unique journey through America.

“In Arkansas, they just want to know everything,” Barnes said.

In a state known for its breathtaking waters, Barnes enjoyed his ride along the Arkansas River.

He stayed for two nights at campgrounds on the shoreline, an experience he described as “awesome across the board.”

Before he left Little Rock, Barnes stopped to enjoy a beer.
(Courtesy of Bob Barnes)

“I’ve stayed in state parks in every state, and [the Arkansas parks are] among the top state parks,” Barnes added.

Barnes also drank in the views from the bridges that cross the Arkansas River as he pedaled across overpasses.

To celebrate his arrival in Little Rock, Barnes took a few moments to enjoy a draft beer.
(Courtesy of Bob Barnes)

“You don’t get that chance very often to be on a bicycle and stop in the middle of a bridge on the top of the Arkansas River,” Barnes pointed out.

Barnes arrived in Little Rock around 3:20 p.m. on Monday, outside the capitol building.

Since the capitol building — which he described as a “behemoth” — had already closed by the time he got there, Barnes wasn’t able to go inside.

This is one of the many images that Bob Barnes shared with Fox News Digital as he arrived by bicycle in Little Rock on Monday afternoon — just a few days after he crossed into the state from Oklahoma on Friday, Feb. 11.
(Courtesy of Bob Barnes)

Barnes did notice the iconic 10-foot-tall bronze doors, however — and appreciated them.

They were made by New York’s Tiffany Studios in 1910, according to the Arkansas State Capitol Self Guided Tour.

“They just draw your attention.”

The doors of the capitol building really stood out for Bob Barnes. “They’re very unique,” he said.
(Courtesy of Bob Barnes)

After Barnes snapped pictures of the capitol building, he stopped for a beer to celebrate his arrival.

On his way out of Little Rock, Barnes spoke with a police officer about where he might stay for the night without getting into any trouble.

“I was forthright with him,” Barnes recalled. “I told him who I was and what I was doing … And he was awesome. He was just like, ‘As long as you’re not bothering anybody, you can sleep anywhere you want down the road.'”

“When I camp, I’m more worried about bothering law enforcement or having somebody call them and come check on me,” said Barnes.

“But he was cool, so that just gives you a little bit of insight into the police and how they treat me out here,” he added.

‘Warm weather in front of us’

Though the weather hasn’t been as extreme as it was in Oklahoma — there, Barnes had to stop for two days because of snowstorms — temperatures have been chilly.

Barnes was glad the weather was looking up.

“We’re getting warm weather in front of us, so then I can open up my horizons a little bit more instead of just focusing on staying warm and finding a place to sleep,” Barnes said.

As the days gradually lengthen, Barnes said he was looking forward to tackling volunteer work, something he’s been trying to do along his entire trip whenever possible.

TONY ROBBINS GETS REAL ABOUT SUCCESS IN LIFE AND HEALTH

On his first day in Arkansas, he was able to donate blood.

This is the third time he’s done so on his “across America” trip. He believes in giving back.

Next stop: The Pelican State

“I’m an urban dweller,” Barnes, who is single, also revealed. “I’d rather be biking through New York City than out in the country.”

He added, “But, you mix it up. You get the scenery in the country. In the city, you get the action.”

Though he’s enjoyed Arkansas, Barnes said he’s ready for what still lies ahead.

Bob Barnes, in front of the Arkansas state capitol building. He’s cycling to all 50 U.S. state capitals this year. “One capital at a time,” he said.
(Courtesy of Bob Barnes)

Even so — and despite craving change — Barnes said he’s not looking too far ahead.

“One capital at a time,” he said of his planning.

“That’s it. So right now, I’m focused on Baton Rouge [Louisiana] — and nothing past it.”

Stay tuned for Barnes’ very next stop in The Pelican State.

And by the way, for all readers’ clarity as Barnes continues his journey: He plans to bike to Juneau, Alaska, after taking a ferry there from Canada.

He’ll also bike to Honolulu, Hawaii — after flying with his bike to the island. 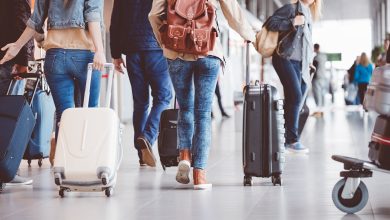 travel: Remote work is changing travel. Here’s what you need to know 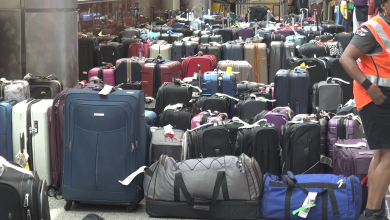 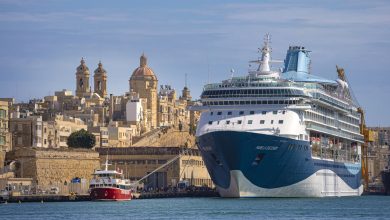