Which European club is Al-Ahli similar to in size and stature? It’s an interesting question. The team from Jeddah have a prestigious history but are not a dominant club in Saudi Arabia.

Their three championships, the last of which came in 2016, is an impressive haul but does not measure up to the record of Al-Nassr, Al-Ittihad and, of course, the 18-time winners Al-Hilal. Al-Ahli then are no Manchester City, Paris Saint-Germain, Juventus, Bayern Munich or Real Madrid. Perhaps their relegation can be compared to the prospect of Arsenal or Borussia Dortmund slipping into their respective second tiers in England and Germany but that is up for debate.

It is a testament to the strength of the Saudi Arabian league and how deep the competition goes that a team can have plenty of stars, can reach the latter stages of the Asian Champions League as they have in four of the past five seasons, and still go down. It is good for the league for all to know that no team is too big to be relegated, that if you make a few mistakes then the ultimate punishment is possible. There is another benefit too; the presence of Al-Ahli will give the second tier much more attention next season.

Al-Ahli won’t be thinking too much about that. There have been big clubs in the past that have gone down, embarked on a much-needed reset, and have come back to the top tier revitalized and energized. There are precedents from elsewhere. A troubled Newcastle United went down in 2009 but then won the Championship in style, came back up and were in the top five in the English Premier League within two years.

That is the challenge for Al-Ahli, to come straight back up, leaner and healthier. The signs so far are mixed however. It is inevitable that players are going to leave and fans have been sad to see the back of Hussein Al-Maqhawi. The midfielder has been in Jeddah for seven years, played 232 games and scored 25 goals but has signed for Al-Fateh back in the top tier. As a parting shot, he said goodbye to the fans on social media but also told the club’s management that they did not know anything about football, and said that the players had expressed their opinions but had been ignored.

This is the problem that needs to be resolved. From sources at the club and various journalists, have come reports of expressions of displeasure made by players who feel that there is a lack of clarity and direction coming from those in charge. Instead of a resolve to use relegation as a chance to start again and build a new culture, the bosses seem to still be in shock.

There has been a lot of pressure on club president Majid Al-Nafie. There had been rumors that he was on his way out but there is set to be an extraordinary meeting on July 25 that could be an interesting and important affair. If there is to be new leadership at the club, it is better to get the situation sorted as soon as possible.

There are still issues to be resolved. Coach Robert Siboldi took over in March but his attempts to tighten up the backline and make the team harder to beat were not enough to stop the slide into the second tier. If one of the late chances against Al-Shabab in the final game had ended up in the back of the net then Al-Ahli would have stayed up. The Uruguayan is keen to stay in Jeddah but has reportedly asked for a salary increase, so it remains to be seen how it all works out.

Apart from the atmosphere at the club, the future of Omar Al-Somah is a big topic of conversation. The Syrian striker has been with Al-Ahli for eight years and has reached double figures in every campaign. Such a solid record of goalscoring means that even at the age of 33, there is plenty of interest. Kuwaiti giants Al-Qadsia have been making most of the running but there have been enquiries from Qatar, the UAE as well as other teams in Saudi Arabia. Al-Ahli do not want to lose him to a domestic rival, however, and there is still a hope that Al-Somah will be terrorizing second division defenses next season. Al-Ahli are keen to keep as many Saudi players as possible but it remains to be seen what happens with the foreign imports.

They have to get a move on. It is now over two weeks since they fell. With last season finishing late due to various postponements, there is not much time before the next campaign starts and if they want to bounce back at the first time of asking, they need to be ready. 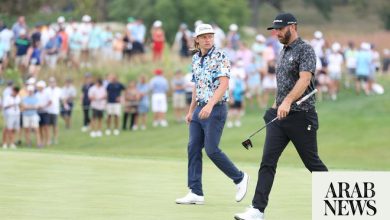